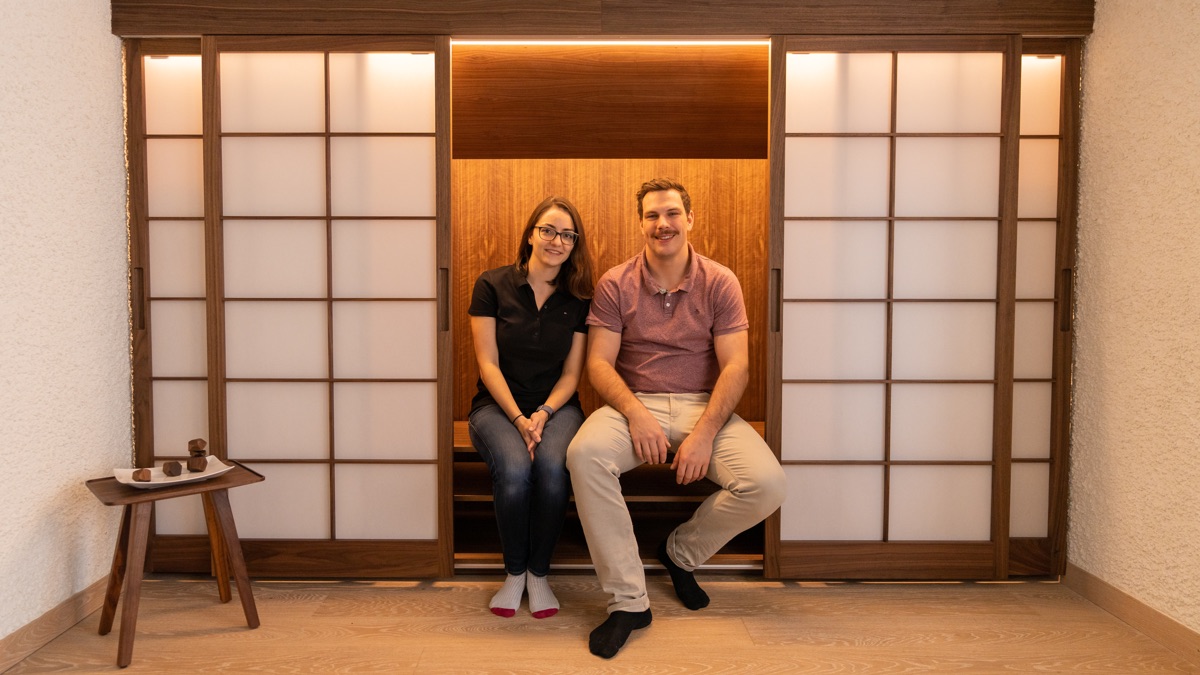 Manuela and Andreas are judokas. Their heart beats for Japan and Japanese culture. That's why they submitted a special project for the dream home competition of our partner key4 by UBS in "20 Minuten". The readers liked the project best and the two judokas were able to realise their dream home thanks to key4 by UBS and Houzy.

It all started on a straw mat

Two years ago, Manuela and Andreas met in training during a judo spectacle on a tatami. These rice straw mats have been used for centuries in Japan as floors for martial arts such as judo or karate, but also as floors for traditional living rooms and bedrooms, which may only be entered barefoot or in socks. When the two recently happened to purchase a detached house in Bünzen in the canton of Aargau, it was clear to them: "When it comes to furnishing, Japanese culture should characterise at least part of our home."

An oasis of well-being under the sloping roof

When key4 by UBS and Houzy announced the living dream competition in "20 Minuten", Manuela and Andreas submitted their project. They wanted to set up a tatami corner in a room under the sloping roof instead of the usual sofa landscape, where they could relax, read, meditate or drink tea. Just like in Japan. The project convinced the readers the most and received almost a third of all votes in the 20 Minuten community.

Five weeks to realise the dream

A strong team: the craftsmen in the Houzy network

That's why ipunkt from Brittnau made the substructure for the 40-centimetre-high platform for the tatami mats and the shoji sliding doors for the built-in cupboards in the joinery. Particularly practical: a retractable table is hidden in the podium of the superstructure - and under the superstructure, three large drawers offer plenty of storage space. Then the carpenters transported all the parts to Bünzen and set up the complete tatami corner in three and a half days. With tatami mats from FORMPLUS in Bern and futons, blankets and covers in calm colours from Sato in Zurich. The atmospheric lights also come from the specialist shop for Japanese living and sleeping culture. The lighting concept was developed by the experts from D+M Elektro in Zurich and Thalwil, who also installed all the lights and power connections.

With the reconstruction, Manuela and Andreas have gained more than "just" a room. They now have a space for their great passion for Japan and Japanese culture in everyday life - and can travel to the Land of the Rising Sun, at least in their thoughts. All they need is a good book and a cup of matcha or sencha. Moreover, they can also use their Japan room as a guest room for visitors thanks to the generous built-in cupboards and the three large drawers under the tatami structure. For example, when other judokas visit them.

Are you looking for craftsmen for a project like this? In our network you will find professionals from your region who we can recommend to you with a clear conscience.

This Is How You Can Help Ukrainian Refugees

Online Property Search: How to Find Your Dream Home

Houzy and key4 by UBS: a Strong Team