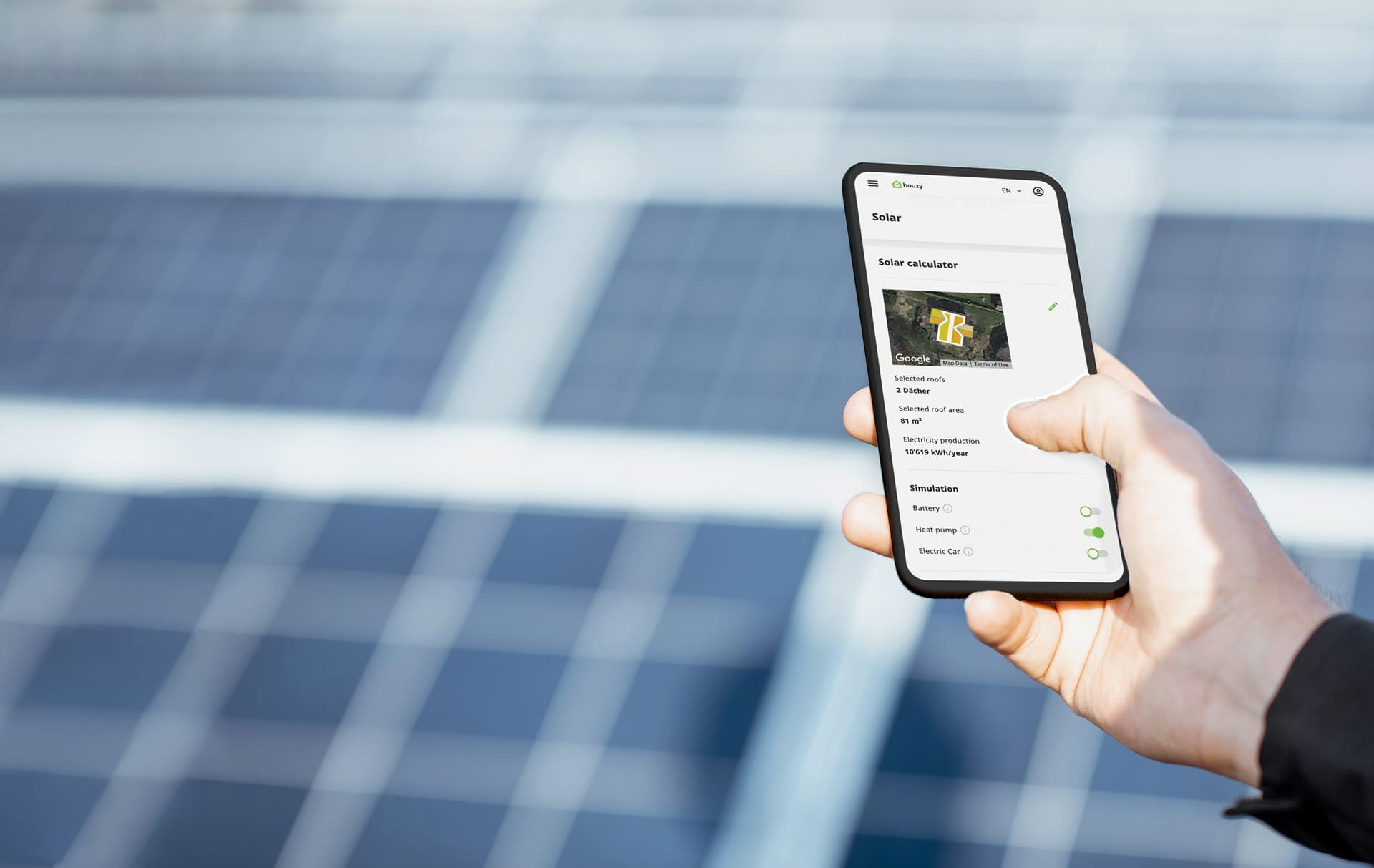 Planning to install solar panels on your roof? What about roof suitability and the price of solar installations? Or maybe you're just curious and want to learn more about energy self-sufficiency. The Solar Calculator is here to help! Customized results. 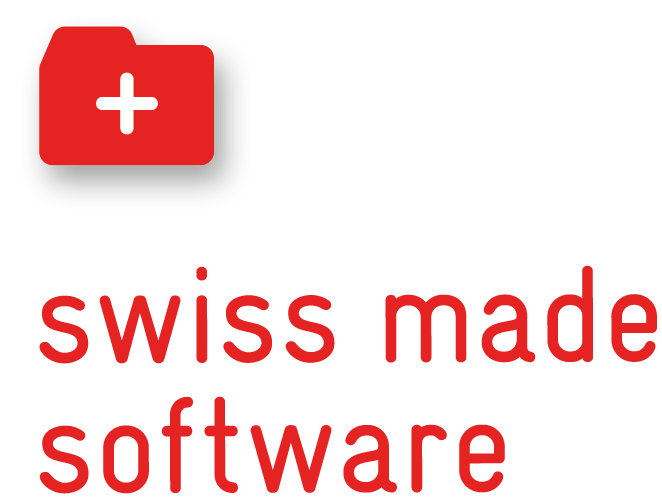 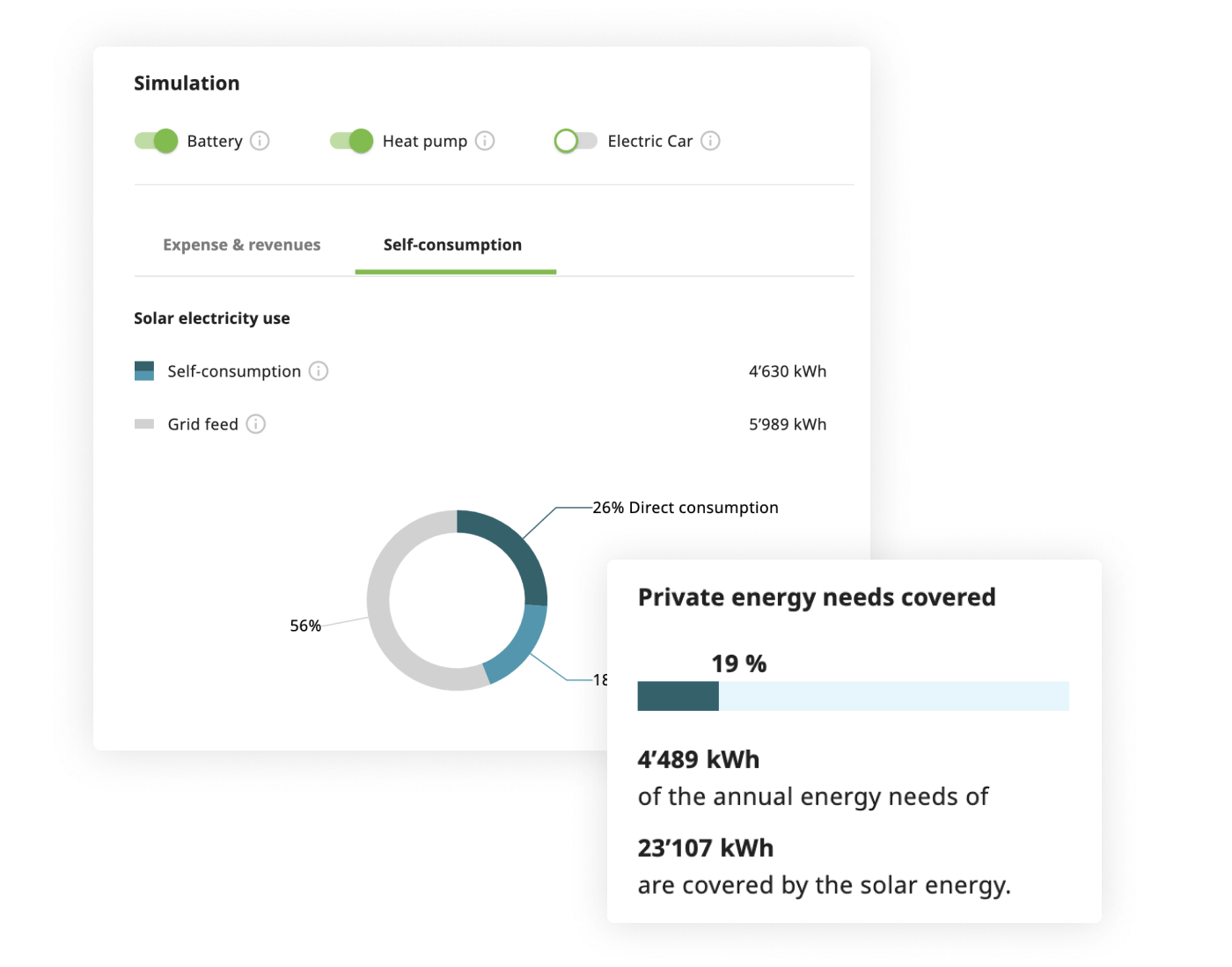 Houzy Solar Calculator – Solar potential and costs at a glance

With just a few clicks, you can get a first overview of your future photovoltaic system – online and free of charge.

Advantages of your own photovoltaic system – Sustainable, cost-effective, self-sufficient

They produce climate-friendly electricity and contribute to a better environment.

The value of your home is significantly increased by a solar installation on the roof.

The federal government supports the purchase of solar systems with approximately 20 % subsidies. The investment costs can also be deducted from taxes in most cantons.

Solar power from your own roof is cheaper than power from the public grid. You can permanently reduce your electricity costs by 30%.

With your own solar system, you become self-sufficient and are less affected when electricity price increases.

They generate income by feeding solar power into the grid. In most cases, the initial investment for a solar system pays for itself over its entire lifetime.

Houzy Solar Calculator – How it works

Enter the relevant key data about your property and energy consumption in just a few steps.

The annual solar potential of your selected roof and the associated cost are calculated based on your selection.

Get your online results

After the analysis, you will receive online access to your free solar evaluation by mail. 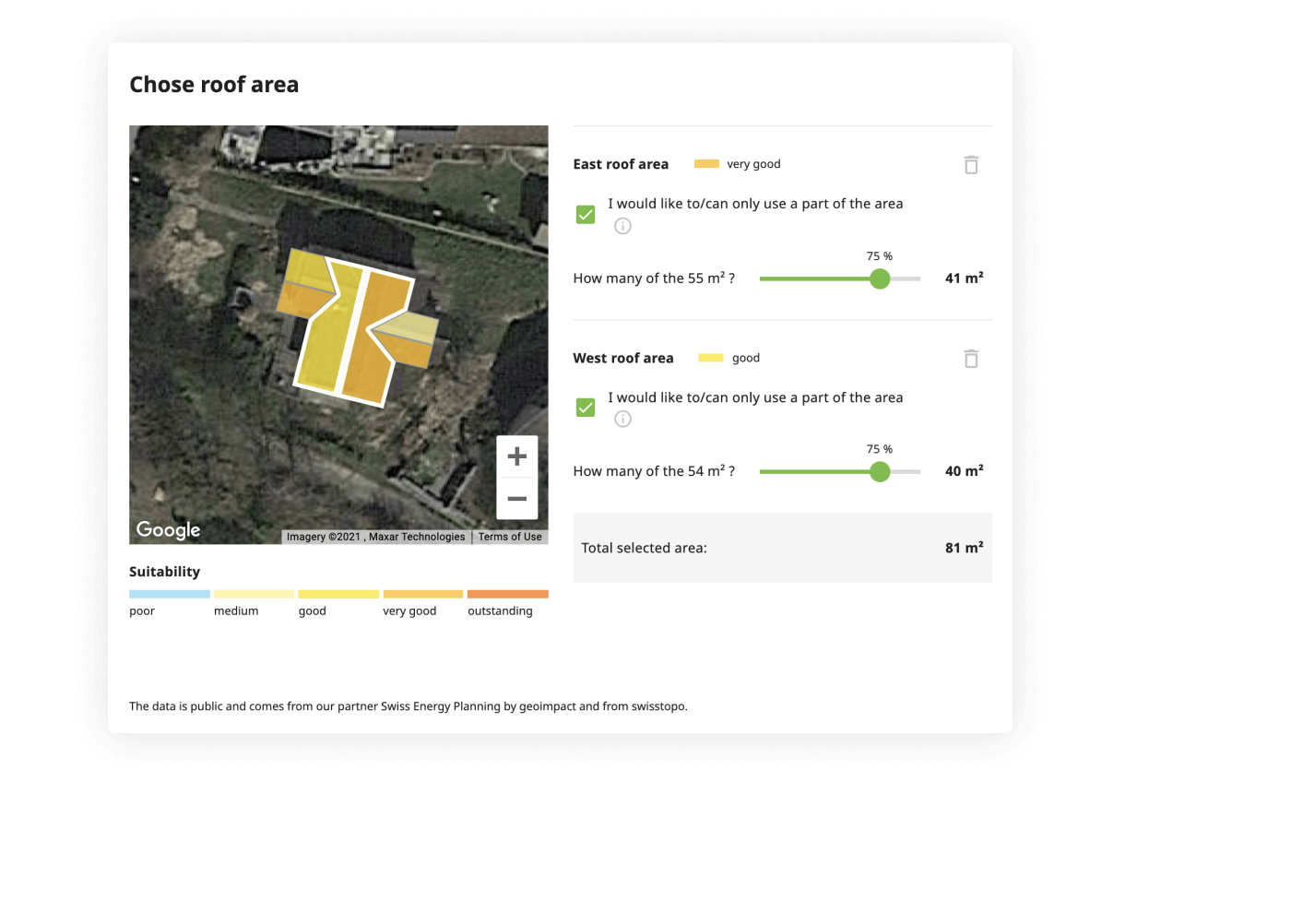 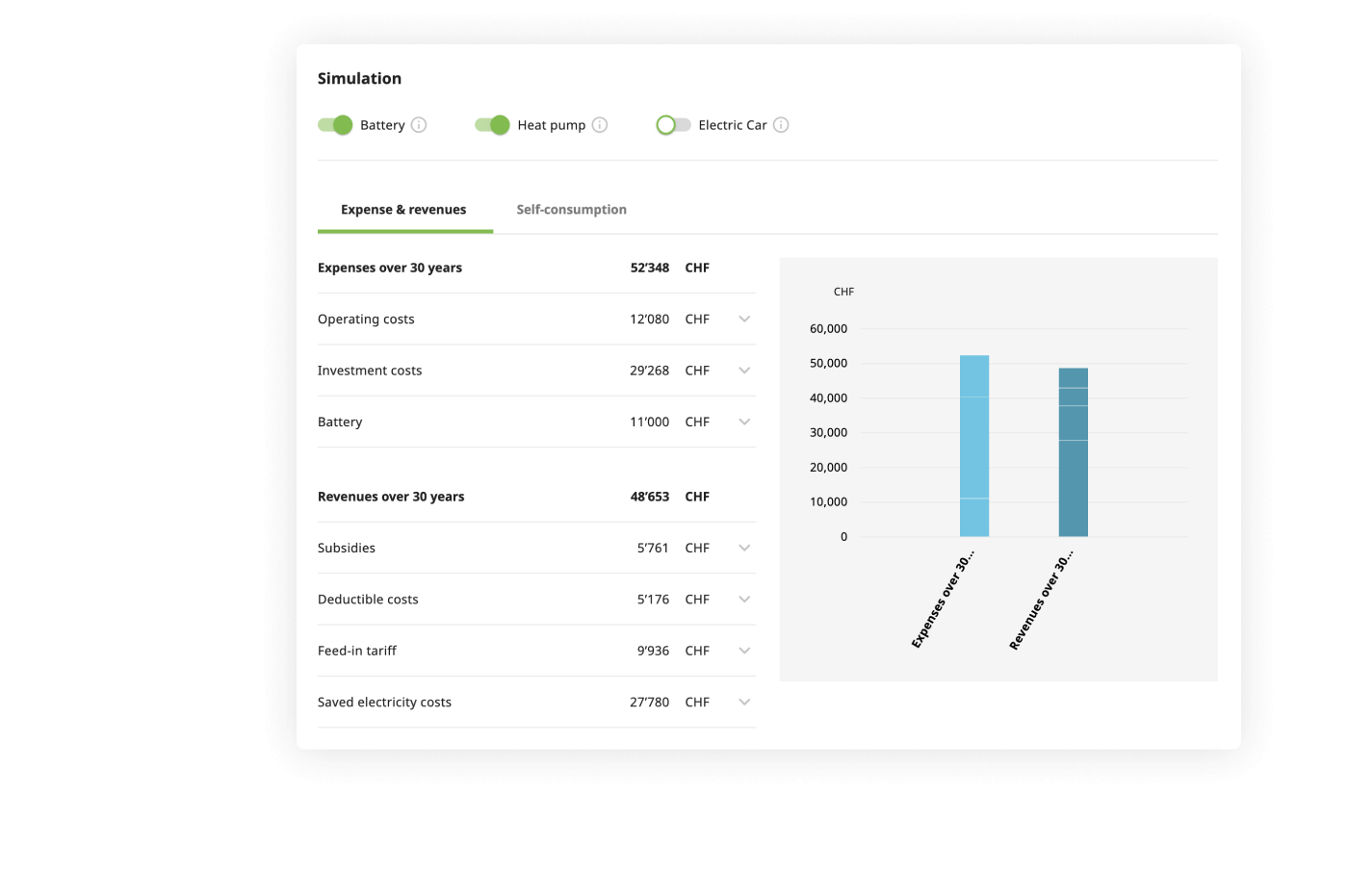 Calculate the profitability of a photovoltaic system with our Solar Calculator – Are solar panels worth it?

Solar systems combined with high self-consumption often pay for themselves after 15 to 20 years. Our Solar Calculator analyzes the profitability of a PV system for you. If the roof is suitable for a photovoltaic system, the question often arises: Is the investment worth it? From a purely ecological point of view, this question can always be answered with a yes. From an economic point of view, the costs (acquisition costs, operating costs), the subsidy contributions, the local electricity prices, the local feed-in tariffs, self-consumption etc., are decisive. Our Solar Calculator calculates the amortization period and shows you neutrally whether the investment is worthwhile. 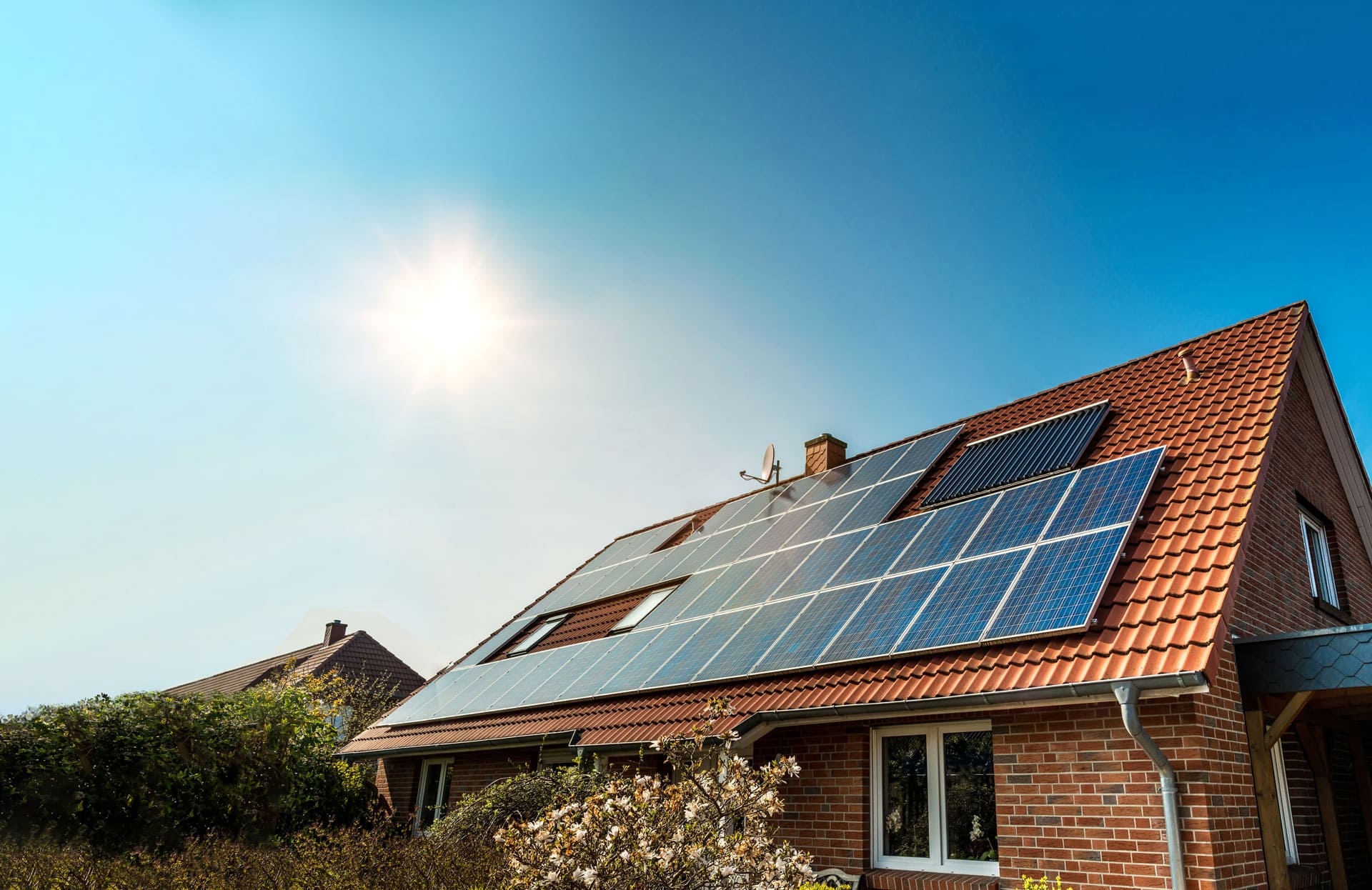 Our digital Solar Calculator combines different databases, so you can get an all-in-one result. Based on your location, we calculate the solar potential of the house.

The data you enter is sufficient to provide you with a first estimate of the annual electricity production and consumption as well as the costs. This enables you to assess whether a photovoltaic system is a sensible investment for you and your needs.

A normal solar power system for an average single-family home in Switzerland costs around CHF 15,000 after subsidies and tax savings. 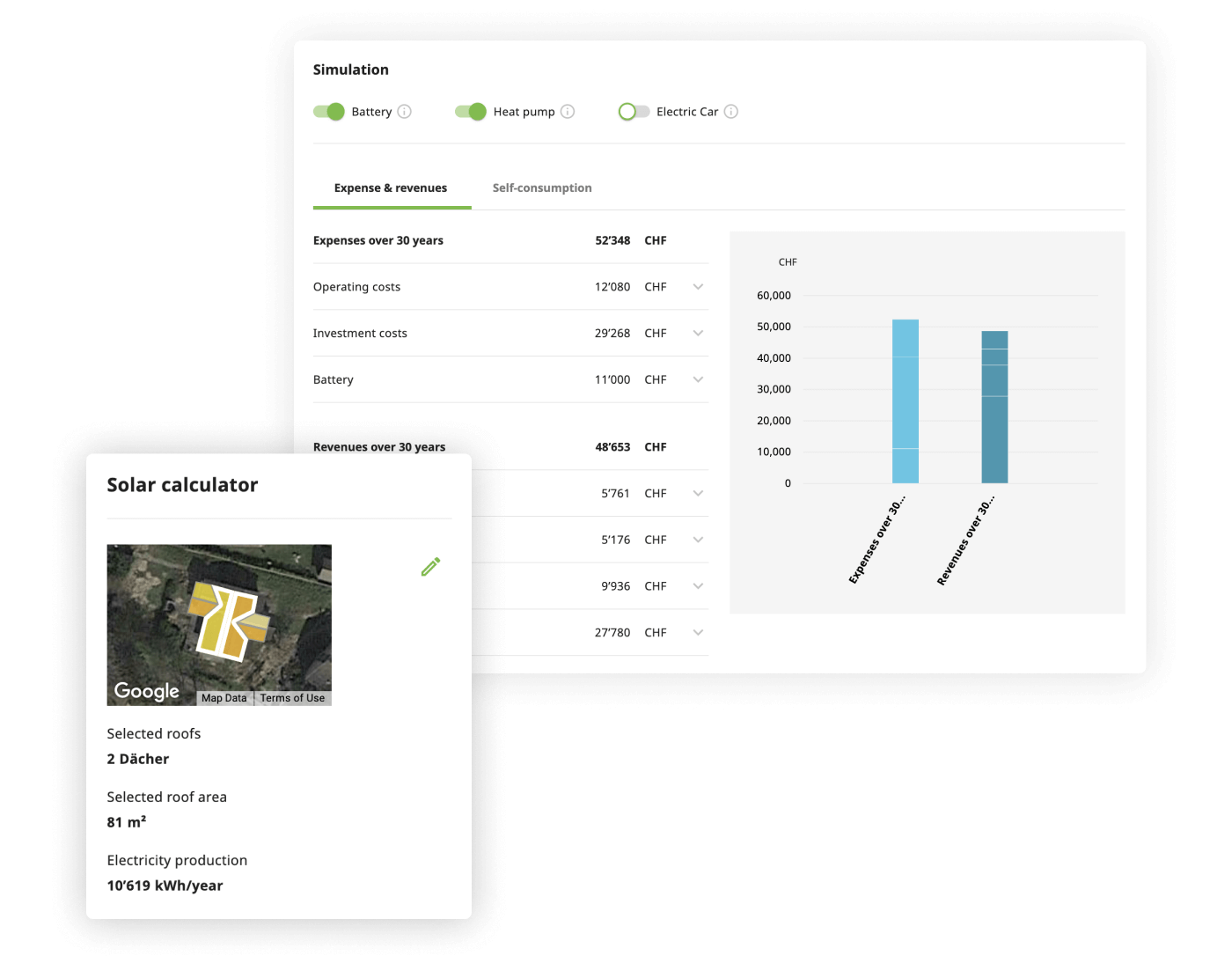 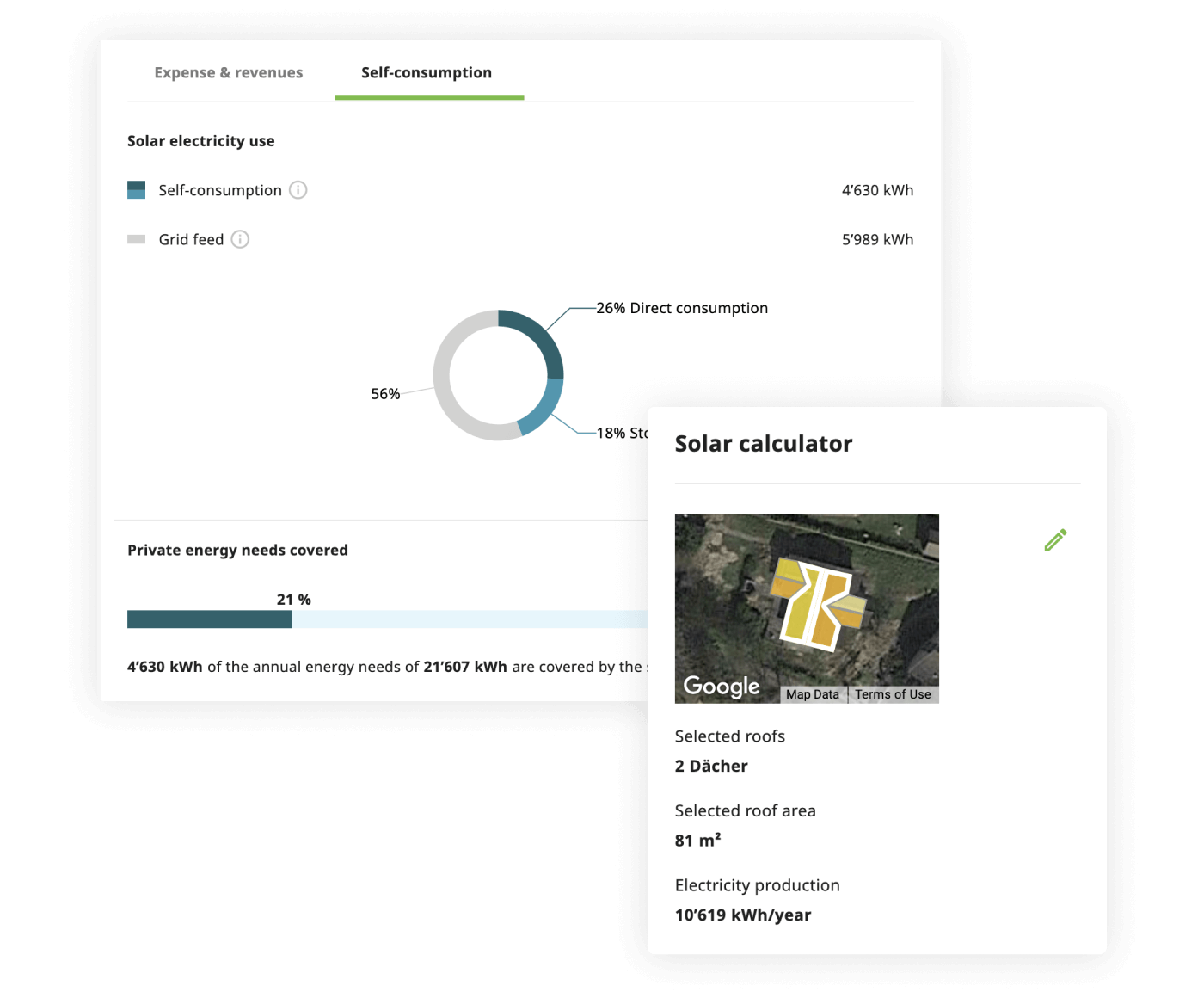 The higher the self-consumption and the proportion of solar energy produced in the total energy requirements, the faster the solar system pays for itself.

What are the advantages of the Houzy Solar Calculator?

The digital solar calculator from Houzy analyses the solar potential as well as the costs of a photovoltaic system with just a few entries - completely free of charge and without obligation. The analysis is based on all relevant criteria of a solar analysis and shows you the investment costs, operating costs, subsidies, tax savings, feed-in tariffs, etc. in detail. In just 2 minutes and after a few clicks, the solar calculator is ready and you can see all the relevant information about the photovoltaic system in an overview. The results are completely neutral - Houzy is an independent platform and does not pursue any third-party interests.

What information does Houzy need for the Solar Calculator?

To find out whether your house is suitable for a photovoltaic system, we need the address. This allows us to obtain relevant information from publicly accessible databases and directories, such as the geographical location, roof area or roof orientation. Some key data about the house and your energy requirements help us to fine-tune the calculations. Afterwards, you will immediately receive online access to your digital solar analysis on Houzy by email.

Why is the Solar Calculator free of charge?

Houzy is a start-up and finances itself by brokering third-party services and through advertising partnerships with national and regional partners. However, you as a user always decide for yourself when you want to share which data with whom, and thus always retain data sovereignty. The use of our solar calculator and the entire homeowner platform is permanently free of charge for you. However, if required, you can request free quotes for the installation of a photovoltaic system from one of our recommended tradesmen in your region.

What happens to my data?

Data protection and security are our top priority. That's why we leave nothing to chance. To ensure the protection of your personal data and secure data transmission, we work with the latest security technologies. Your data is stored in encrypted form in a computer centre that is certified with all current industry standards. Data is therefore only passed on to third parties if you request service offers via Houzy that require this. An example of this is when you actively contact one of our broker partners. You can find further information in our T&Cs under "Our privacy policy".

Houzy is a young Swiss company that has the goal of simplifying the lives of homeowners through innovative tools and bundled expert knowledge. The Houzy platform integrates user-friendly online tools such as the property valuation, the renovation calculator or the plant guide, which help to optimally manage residential property and save effort and costs in the process. The scope of Houzy is constantly being expanded. You can find out more under About us.