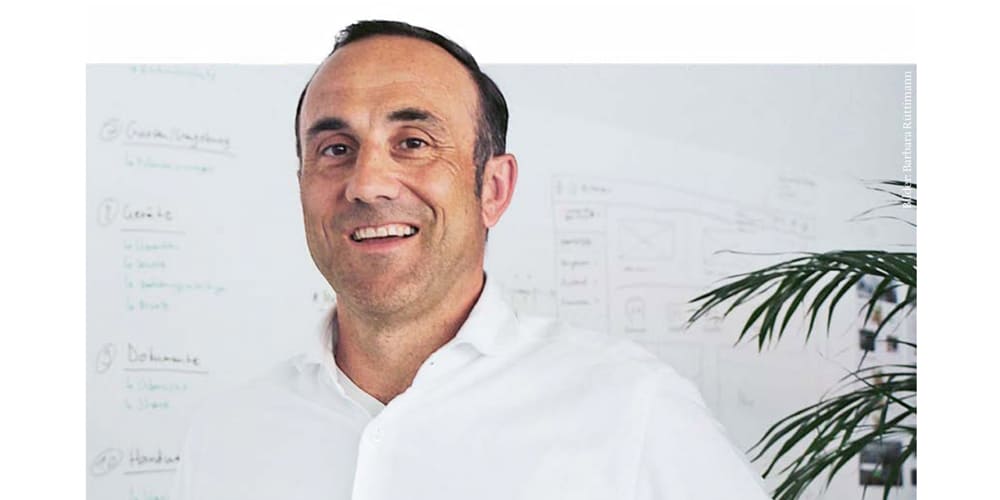 Successful as a start-up: with team spirit and sporting ambition

Interview by Barbara Rüttimann with Stefan Schärer, CEO of the startup Houzy AG

You launched a digital home manager called "Houzy" two years ago. How did the brilliant idea come about?

The idea came about in a conversation with one of my co-founders, André Bachmann. We talked about how little people actually know what to expect when they buy their own home. And this despite the fact that for most people, owning a home is the biggest investment and the biggest financial asset in life. In addition, the purchase of a house is naturally also a very emotional event. Using digitalisation as a tool to make life easier for homeowners was then our "bright" idea. This idea did not come about by chance, because Bachmann (as the founder of Immosparrow) and I (as the former CEO of Immoscout, among others) have the appropriate professional background in the core areas of "real estate", "big data" and "digitalisation". This is how the vision of the digital home manager came about.

What exactly does this digital home manager "Houzy" offer?

We want to make life easier for homeowners by digitally recording their homes. Today, buyers are actually looking for a "smart" house. Classic smart home applications, such as building automation, support many areas - but they often initially require high investments in devices or other components with the corresponding hardware and software. In addition, they do not take a holistic view of the house. Houzy offers a real alternative for homeowners who want to start optimising their home right away without any hurdles. This is done by means of cloud software: Houzy accesses a network of millions of empirical data that are intelligently applied to specific customer inputs, thus enabling the homeowner to assess renovation needs, house value and much more. This satisfies needs such as budgeting, renovation planning, optimal recommendations for action, maintenance tips, etc. - all on-demand, free of charge and with no capital expenditure.

Today, after 2 years, you are already on the road with 12 employees and can look back on renowned partnerships. What is the secret of your success?

From the idea to the concept, we were very fast and found enthusiastic partners and investors just as quickly. The reasons for this lie in our specific experience, knowledge of the industry and the essential network. We were also able to estimate which set-up work would take how long and how much resources would be needed. It is important to realise that we are not a high-tech case, but digitally represent or support something real, namely a home of one's own.

You have grown, gained customers and further developed your platform. What tips do you have for other start-ups?

I see five of these points as particularly important to consider:

What role do you take on as CEO? As a former professional handball player, do you lead differently?

I see my leadership role in the duality of "captain and coach". On the business, this means entering into the right partnerships or pursuing the right expert strategy, for example. "In the business", i.e. in the start-up itself, this means planning, deciding and implementing the right steps. And this always together in and with the team. In doing so, it is indispensable to keep an eye on the financial stakes.

A start-up is notoriously running out of money. Every few months you are in a fundraising process here where I and we as the Houzy team are on trial with our valued partners as well as investors.

How is the cooperation going internally?

As a former captain of the Swiss Olympic handball team in 1996, I know about the success factor "team spirit". We strictly follow the three dimensions of each team of A) the right roles/"skill versus will", B) the age mix for experience and innovation and C) the general gender mix. For us, this means balanced age groups, roles, gender, education and work. This not only leads to a really good cooperation but also transfers to our product innovation steps. Because especially in home ownership, all kinds of roles and emotions come into play. This gives us a more comprehensive view of the entire life cycle of a homeowner.

What about goal achievement in a start-up like yours?

Objectives are comparable to a goal. We simply have to score a goal. For a start-up, this means in plain language that "doing" and "today" are in the foreground; there are no concrete plans that are longer than three to six months. It is a matter of constantly facing up to today's new challenges and adapting the plans so that goals can be scored on an ongoing basis. A start-up functions quickly, agilely and purposefully.

At Houzy, we are currently working on making a large amount of functionality available to our users as quickly as possible, with the desired depth and scope. However, this is not a trivial task. If you ask three homeowners what their three main needs are, you get three totally different opinions. This multidimensionality in the user community of range breadth and depth in the requirements is our greatest challenge.

Your most important final statement for start-ups?

To be with each other. And that in multiple, networked and parallel ways. Because we are no longer in an analogue environment; today, the winner is the one who is dynamic, agile and has speed. To put it in a nutshell with the analogy of handball: pass the ball dynamically to each other.

Last but not least: your personal dream home?

I am living my housing vision; a home of my own with a view of the lake and mountains.

Stefan Schärer, CEO and founder of Houzy. Stefan Schärer began his career with TV Endingen. In 1986, Schärer moved to ZMC Amicitia Zurich and also made his debut in the national team. At Amitica, Schärer played until 1989 and won three championship titles with the Zurichers and reached the European Cup final in 1987 with the Zurichers, which was lost to ZSKA Moscow. One of his career highlights was finishing 4th at the 1993 World Cup with the national team. His self-proclaimed second career highlight was the 1996 Olympic Games in Atlanta, where Schärer was allowed to lead the Swiss delegation as a flag bearer at the opening ceremony. After his career ended, he worked in the online business, including for Ringier Digital and as CEO of ImmoScout24 and Moneyhouse. Since 2017, Stefan Schärer has been active as an entrepreneur, investor and board member in the digital real estate industry (proptech).

This Is How You Can Help Ukrainian Refugees

Online Property Search: How to Find Your Dream Home