Solar Tiles Are an Alternative for Design-Conscious Homeowners

More and more builders and homeowners are opting for solar power. That is why more and more roofs with photovoltaic systems can be seen in Switzerland. Not all of them fit harmoniously into the overall appearance of the house, because large-area standard modules cannot be easily installed around skylights, hatches or chimneys. Solar tiles are the same size as roof tiles and are placed and installed in the same way. They are hardly distinguishable from a distance or even up close.

Solar tiles are an in-roof photovoltaic system and combine roof tiles and solar power production. Although they are a trend today, the idea is three decades old: in 1991, four engineers from Constance patented "solar roof tiles consisting of a tile and a solar cell panel that can be mounted on it". Supply and demand are still low, but have been rising strongly in recent months. The same ecological and economic reasons speak for photovoltaic systems and solar tiles. These are the five most important arguments from an economic point of view: With solar tiles ...

Read more about the economic reasons for a photovoltaic system and thus also for solar tiles in our article "Solar power system: Is solar power worth it?". 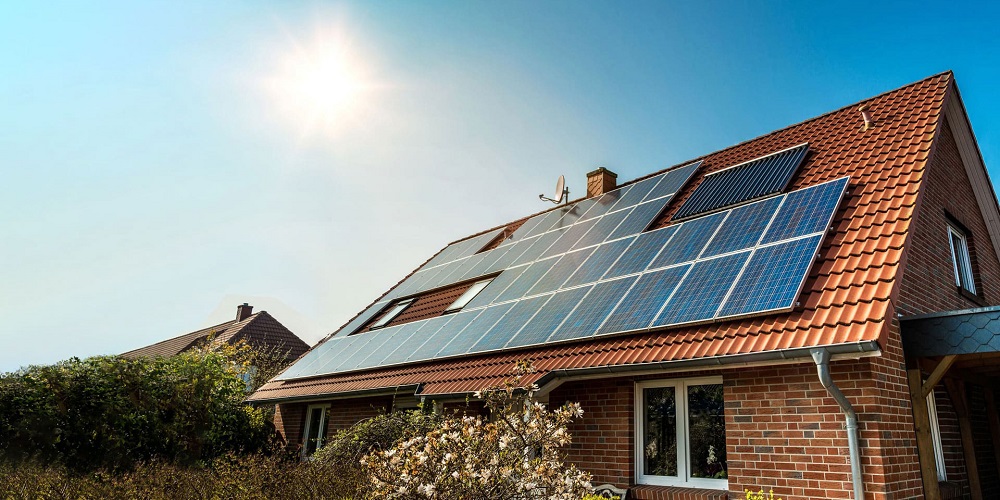 Solar potential and costs at a glance

With our Solar Calculator, you can analyse the solar potential of your roof in just a few minutes and calculate the profitability of a solar system.
Check solar potential now

Solar tiles in many colours, shapes and sizes

To ensure that solar tiles fit harmoniously into the overall picture, they look like roof tiles or shingles. Among other things, they are available as flat or wave-shaped roof tiles or plain tile roof shingles, in standard sizes or special dimensions and in many colours from the RAL colour palette. Ceramic terracotta-coloured solar tiles, which are hardly distinguishable from normal tiles, are popular. Solar tiles can be individualised, for example with gold leaf, in a moss look or with your own motif. The surfaces can also be customised, for example with a wood or slate look. If you want to cover the entire house roof uniformly, have passive shingles or blind modules installed for the area that faces away from the sun and does not produce solar electricity.

With our Solar Calculator you can check the solar potential of your home online and easily calculate all the costs, potential and energy production of a solar installation.

In the article "Solar energy: Is my roof suitable for a solar system?" you will learn everything you need to know about the optimal roof orientation and pitch.

How much solar power do solar tiles produce?

Solar power production depends on the rated power. Currently, solar tiles have an average output of 90 watt-peak or Wp per square metre, the most powerful bricks, for example from Autarq, even 125 watt peak. Wp is a common but non-standard unit of measurement for the electrical output of solar cells. For an average single-family home with average electricity consumption, 10 kilowatt-peak or kWp should be enough. For this, you would need to cover plus/minus 111 m2 of roof area with solar tiles. The higher the rated power, the smaller the area. Compared to traditional photovoltaic systems, the power density is still low.

Other factors for solar tiles selection

Clay roof tiles without a solar module have a service life of 60 to 80 years.

The International Electrotechnical Commission in Geneva has defined minimum standards for solar roof tiles. When choosing, make sure that the tiles are certified according to the IEC-61215 standard.

The price range for bricks is from 250 to 450 francs per square metre for the material. This means that the 111 square metres for our example single-family house in the section "How much solar power do solar tiles produce?" cost 27,750 to almost 50,000 francs. This is more expensive than an in-roof photovoltaic system with the same output and significantly more expensive than modules for a comparable on-roof system. In addition, there is the work of the roofers and electricians. Solar tiles are placed on wooden supporting battens and laid like other tiles. The only difference is that the solar roof tiles have to be connected via cable plugs. Most manufacturers recommend that a roofer lays the solar roof tiles and an electrician connects the system to the inverter and the power grid.

In-roof systems with solar tiles are financially subsidised like other energy measures. In our example with just under 5,000 francs: 420 francs per kWp output and 770 francs for the system. An overview of all federal, cantonal and municipal subsidy programmes as well as energy suppliers can be found at energiefranken.ch.

For new buildings, the additional costs for solar tiles are much lower. Calculate the solar potential of your house and request offers from certified professionals from your region..

The biggest and most important advantage is, of course, that small-area solar tiles blend seamlessly into the overall appearance of the house. Thanks to blind modules or passive shingles for the side facing away from the sun, or solar tiles that are matched to the size, shape and colour of the other tiles, the roof looks uniform from a distance and up close. Furthermore, solar tiles are often the only way to add a photovoltaic system to a house that is listed.

Where there is light, there is shadow. This also applies to solar tiles. On the one hand, an in-roof system with solar roof tiles costs significantly more than a comparable photovoltaic system because tile production is (still) more complex. Secondly, the output is lower in relation to the area. This is why it takes longer for the initial investment to pay off. In addition, the cost of maintaining and, if necessary, repairing hundreds of solar tiles is greater than for a complete photovoltaic system. Not least because of the many plug connections with MC4 solar plugs.

Tesla has long announced its market entry in Europe and has postponed it several times. Now there are increasing signs that the solar tiles from the USA will be available in Switzerland in the foreseeable future. However, it is still unclear when mass production will begin. Those who do not want to wait that long will find many manufacturers in Europe. In Germany, Italy and Switzerland, solar roof tiles have been developed, produced and sold for some time. Nevertheless, the market is still a niche market. That could change with or thanks to Tesla. With its Solar Roof, the American car manufacturer appeals to design-savvy people who are willing to pay more for the same performance. The other manufacturers and their solar tiles are also likely to benefit from the interest that Tesla is generating.

Do you want to know whether your house roof is suitable for a photovoltaic system? Use our solar calculator to calculate the solar power potential, your investment and the possible energy production. If you are convinced by the result, you can contact verified solar power experts from your region with one click and request quotations.

Winterize the House: What You Need to Bear in Mind When It's Cold, Wet and Snowy!